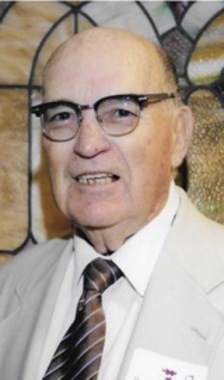 Back to Raymond's story

Raymond E. "Ray" Dunn, 91, of Grove City, passed peacefully on Monday, Jan. 13, 2020.
Ray was born on June 28, 1928, in Grove City, to Frank H. and Bessie L. (Knauff) Dunn. He married Marjorie Boozell, who preceded him in death. Ray later married Elsie M. (Agnew) Wagner.
He was a 1946 graduate of Grove City High School. Following graduation, he served in the U.S. Navy during the end of World War II and in the Korean War.
Ray retired in 1985 from the U.S. Postal Service where he was a mail carrier for 31 years, beginning his career in Harrisville and ending in Grove City.
During retirement, Ray worked as a security guard at Slippery Rock University and Grove City College.
He was a member of East Main Presbyterian Church and the F. and A.M. Lodge 603, both Grove City.
Ray is survived by his wife Elsie at home; six children, Terry Dunn and wife Devota, Grove City; Pamela Raisley and husband Charles, Colo.; Timothy Dunn and Luisa, Grove City; Mark Dunn, Ore.; Shelia Buchanan, Erie; and Tami M. Wagner, Slippery Rock; 10 grandchildren; 11 great-grandchildren; and two brothers, Larry and Kenneth Dunn.
Ray was preceded in deaty by his parents; first wife; two grandsons, Todd Dunn and Sean Courtney; two sisters, Dorothy Mason and Mary Ann Currie; and three brothers, Frank, Robert F. and David Dunn.

Send flowers
in memory of Raymond

A place to share condolences and memories.
The guestbook expires on April 13, 2020.

Bill & Leslie Raisley
Our sincere sympathy. Our thoughts and prayers are with you.
View all