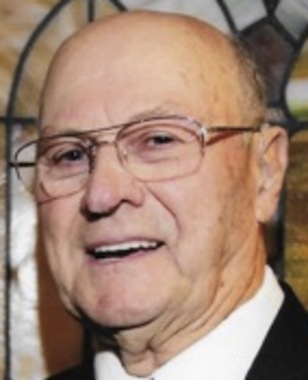 Back to Paul's story

Paul Daubenspeck, Jr., slipped gently into the arms of Jesus on Saturday morning, Jan. 11, 2020, in Grove Manor Nursing Home. He was 93 years old.
Paul was born on Nov. 29, 1926, in Fairview, Pa.
Paul served his country with great pride as Private 1st class in the Army during World War II and was stationed in France, Czechoslovakia and Germany during the War of Occupation.
Paul married Esther Jane Saylor, of Bruin in 1950 and they resided happily in Fairview until Esther's death in 1971.
Paul was a member of St. Peter's Reformed Church for 45 plus-years, faithfully serving his Lord in many capacities. More recently he attended East Main Presbyterian Church in Grove City where he gave much time and energy to the Habitat for Humanity while there.
Paul worked at Sonneborn Sons/Witco Chemical Corporation for 42 years and retired in 1989. He was an avid deer and coon hunter and loved to shoot. He enjoyed many years of hunting and shooting with his children and grandchildren.
Paul remains a hero to his surviving children, Larry R., Englewood, Colo., and Paula Sentgeorge, Lancaster, Pa; five grandchildren; five great grandchildren; siblings Darrell Daubenspeck, Boyers, Pa., Margaret Schnell, Fairview, Pa., Carl Daubenspeck, Petrolia, Pa., Wilma Schnell, North Washington, Pa., and Sandra Howells, Midlothian, Va.
Paul married Dorothy Fitzgerald of Grove City in 1975. She preceded him in death in 2017. He has three surviving stepchildren, Mark Koenig, N.Y., N.Y., Paul Koenig, Solon, Ohio and Patty Kelly, now residing in Hungary and five step-grandchildren.
In addition to his first and second wife; a sister, Anita "Faye" Wulff, precedes him in death.
Memorials can be made to the American Cancer Society.

Send flowers
in memory of Paul

A place to share condolences and memories.
The guestbook expires on April 12, 2020.