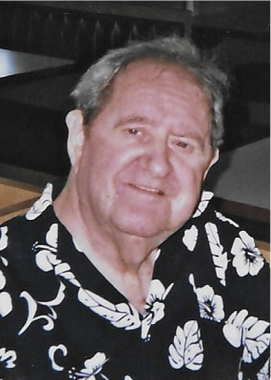 John William Liska of Grove City passed on Wednesday (Feb. 5, 2020). He was 92.
John was born in Johnstown on April 14, 1927, to Adam and Catherine (Merx) Liska.
He married Virginia D. Cline on Oct. 21, 1961; she survives at home.
He served in the Army during World War II.
John retired in 1988 from Cooper Bessemer where he was a crane operator/material handler for 41 years and four months. He was also employed at Grove City College and Mercer Forge.
John enjoyed bowling and playing the harmonica. He was a past member of several bowling leagues and harmonica clubs over the years.
John was a fan and follower of NASCAR. He also enjoyed being Santa during the Christmas season.
Besides his wife Virginia, he is survived by: his son, John A. Liska and wife, Carol, Greenville; two granddaughters, Melissa Walls and husband, David, Butler, and Tina Liska, Pittsburgh; seven great-grandchildren, five great-great-grandchildren; twin great-great-great-granddaughter and grandson; and many nieces and nephews.
He was preceded in death by: his parents; a daughter, Connie J. Liska; a grandson, Chris Liska; four sisters, Helen Craig, Mary Smith, Dorothy Zett and Margie Esper; and two brothers, Francis and Joseph Liska.

Send flowers
in memory of John

A place to share condolences and memories.
The guestbook expires on May 06, 2020.