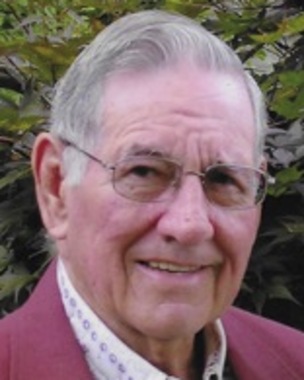 John S. Elliott Jr., 91, of Newhaven Court, Butler, formerly of Allison Park and Grove City, went home to be with the Lord on Tuesday afternoon, July 23, 2019.
John was born on July 5, 1928, in Grove City to John Sr. and Anna (Martin) Elliott. He married Nancy Jane Carnahan in Harbison Chapel at Grove City College on Aug. 6, 1955. She preceded John in death on Nov. 12, 2016.
He was a graduate of Grove City High School followed by Grove City College in 1951. John served in the U.S. Army during the Korean War and was a medic stationed in Ethiopia.
John was employed by H.J. Heinz Co., Pittsburgh, for 35 years, starting in the lab and retiring in 1991 as the manager of compliance audits.
During this time, they lived in Shaler Township where they raised their children.
John enjoyed working in the yard, golfing, hunting, camping and traveling. Together with his wife, he lived a life focused on faith, family and friends.
He and Nancy were members of Elfinwild Presbyterian Church, Glenshaw, for 30 plus years - during which he was involved with Sunday school, Talk-It-Over groups, Session and many other activities.
Upon retirement, John and Nancy moved to Grove City and became members of Grace United Methodist Church, the church in which John grew up. They also enjoyed becoming "snowbirds" and wintering in Sebring, Fla., at the Bluffs of Sebring.
One of John's favorite mantras was, "Life is short, eat dessert first!" and he was never known to pass on a bowl of ice cream! He was known for his integrity, his faith, his dedication to his family, his work ethic, attention to details, a willingness to lend a helping hand and loyalty to his friends.
John is survived by his three children, Jane (Dave) Coul, Hermitage, John (Terry) Elliott, Beloit, Wis., and Cindy Elliott, Oakmont; and three grandchildren, Lindsey (Drew) Myers, Natrona Heights, Melissa Elliott (Mike Kennally), Machesney Park, Ill., and David Coul, Hermitage; along with numerous nieces and nephews and their families.
His parents, wife and a brother, Donald B. Elliott, preceded John in death.
In lieu of flowers, the family request memorial contributions to Grace United Methodist Church, 210 S. Broad St., Grove City, PA 16127 or Elfinwild Presbyterian Church, 3200 Mt. Royal Blvd., Glenshaw, PA 15116.

ELLIOTT
John S. Jr., 91, of Butler.
Calling hours: From 10:30 a.m. to the time of service at noon Friday (7-26-2019) in the chapel of Grace United Methodist Church, Grove City.
Service: Memorial service will be at 12 p.m. Friday at the church, conducted by the Rev. Willard Morse.
Arrangements by CUNNINGHAM FUNERAL HOME INC., 306 Bessemer Ave., Grove City.
Published on July 26, 2019
To plant a tree in memory of John S. Elliott, please visit Tribute Store.

Plant a tree in memory
of John

A place to share condolences and memories.
The guestbook expires on October 24, 2019.

Restore this Guestbook to share a memory or message of condolence of your own.